The CMYK color model (process color, four color) is a subtractive color model, used in color printing, and is also used to describe the printing process itself. CMYK refers to the four inks used in some color printing: cyan, magenta, yellow and key (black). Though it varies by print house, press operator, press manufacturer, and press run, ink is typically applied in the order of the abbreviation. 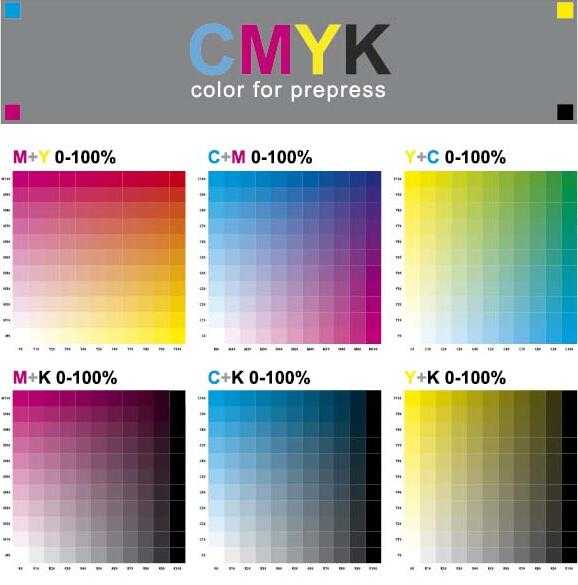 The "K" in CMYK stands for key because in four-color printing, cyan, magenta and yellow printing plates are carefully keyed, or aligned, with the key of the black key plate. Some sources suggest that the "K" in CMYK comes from the last letter in "black" and was chosen because B already means blue. Some sources claim this explanation, although useful as a mnemonic, is incorrect, that K comes only from "Key" because black is often used as outline and printed first.

The CMYK model works by partially or entirely masking colors on a lighter, usually white, background. The ink reduces the light that would otherwise be reflected. Such a model is called subtractive because inks "subtract" brightness from white.

In additive color models such as RGB, white is the "additive" combination of all primary colored lights, while black is the absence of light. In the CMYK model, it is the opposite: white is the natural color of the paper or other background, while black results from a full combination of colored inks. To save cost on ink, and to produce deeper black tones, unsaturated and dark colors are produced by using black ink instead of the combination of cyan, magenta and yellow.

With CMYK printing, half toning (also called screening) allows for less than full saturation of the primary colors; tiny dots of each primary color are printed in a pattern small enough that human beings perceive a solid color. Magenta printed with a 20% halftone, for example, produces a pink color, because the eye perceives the tiny magenta dots on the large white paper as lighter and less saturated than the color of pure magenta ink.

Without half toning, the three primary process colors could be printed only as solid blocks of color, and therefore could produce only seven colors: the three primaries themselves, plus three secondary colors produced by layering two of the primaries: cyan and yellow produce green, cyan and magenta produce blue, yellow and magenta produce red (these subtractive secondary colors correspond roughly to the additive primary colors) plus layering all three of them resulting in black. With half toning, a full continuous range of colors can be produced.

To improve print quality and reduce moiré patterns, the screen for each color is set at a different angle. While the angles depend on how many colors are used and the preference of the press operator, typical CMYK process printing uses any of the following screen angles 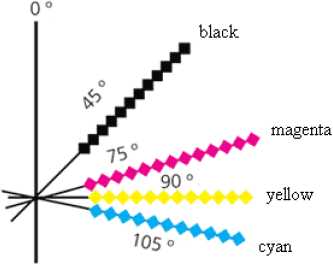 A color photograph of the Teton Range.

The image above, separated for printing with process cyan, magenta, and yellow inks.

The same image, this time separated with maximum black, to minimize ink use.

The "black" generated by mixing commercially practical cyan, magenta and yellow inks is unsatisfactory, so four-color printing uses black ink in addition to the subtractive primaries. Common reasons for using black ink include:

· In traditional preparation of color separations, a red Keyline on the black line art marked the outline of solid or tint color areas. In some cases a black Keyline was used when it served as both a color indicator and an outline to be printed in black. Because usually the black plate contained the Keyline, the K in CMYK represents the Keyline or black plate, also sometimes called the key plate.

· Text is typically printed in black and includes fine detail (such as serifs), so to reproduce text or other finely detailed outlines, without slight blurring, using three inks would require impractically accurate registration.

· A combination of 100% cyan, magenta, and yellow inks soaks the paper with ink, making it slower to dry, causing bleeding, or (especially on cheap paper such as newsprint) weakening the paper so much that it tears.

· Although a combination of 100% cyan, magenta, and yellow inks should, in theory, completely absorb the entire visible spectrum of light and produce a perfect black, practical inks fall short of their ideal characteristics and the result is actually a dark muddy color that does not quite appear black. Adding black ink absorbs more light and yields much better blacks.

When a very dark area is desirable, a colored or gray CMY "bedding" is applied first, then a full black layer is applied on top, making a rich, deep black; this is called rich black.[7] A black made with just CMY inks is sometimes called a composite black.

The amount of black to use to replace amounts of the other ink is variable, and the choice depends on the technology, paper and ink in use. Processes called under color removal,under color addition, and gray component replacement are used to decide on the final mix; different CMYK recipes will be used depending on the printing task. 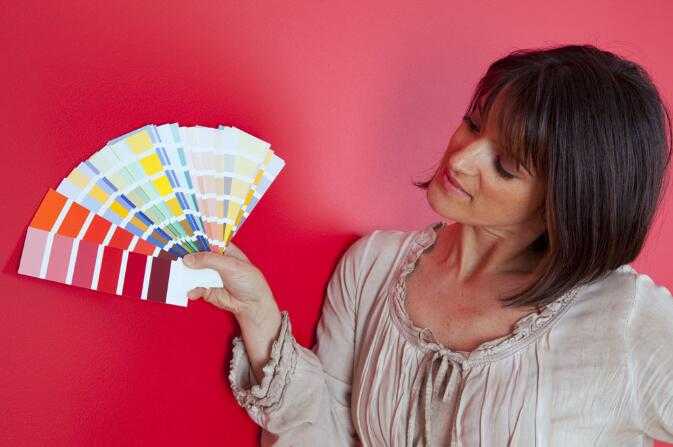 CMYK or process color printing is contrasted with spot color printing, in which specific colored inks are used to generate the colors appearing on paper. Some printing presses are capable of printing with both four-color process inks and additional spot color inks at the same time. High-quality printed materials, such as marketing brochures and books, may include photographs requiring process-color printing, other graphic effects requiring spot colors (such as metallic inks), and finishes such as varnish, which enhances the glossy appearance of the printed piece.

CMYK are the process printers which often have a relatively small color gamut. Processes such as Pantone's proprietary six-color (CMYKOG) Hex chrome considerably expand the gamut. Light, saturated colors often cannot be created with CMYK, and light colors in general may make visible the halftone pattern. Using a CMYK process, with the addition of light cyan and magenta inks to CMYK, can solve these problems, and such a process is used by many inkjet printers, including desktop models.

Comparison of some RGB and CMYK color gamut on a CIE 1931 my chromaticity diagram.

Comparisons between RGB displays and CMYK prints can be difficult, since the color reproduction technologies and properties are very different. A computer monitor mixes shades of red, green, and blue light to create color pictures. A CMYK printer instead uses light-absorbing cyan, magenta and yellow inks, whose colors are mixed using dithering, halftoning, or some other optical technique. Similar to monitors, the inks used in printing produce a color gamut that is "only a subset of the visible spectrum" although both color modes have their own specific ranges. As a result of this items which are displayed on a computer monitor may not completely match the look of items which are printed if opposite color modes are being combined in both mediums. When designing items to be printed, designers view the colors which they are choosing on an RGB color mode (their computer screen), and it is often difficult to visualize the way in which the color will turn out post printing because of this.

To reproduce color the CMYK color model codes for absorbing light rather than emitting it (as is assumed by RGB). The 'K' component absorbs all wavelengths and is therefore achromatic. The Cyan, Magenta and Yellow components are used for color reproduction and they may be viewed as the inverse of RGB. Cyan absorbs Red, Magenta absorbs Green and Yellow absorbs Blue (-R,-G,-B).

If you would like to learn more from us about CMYK, please feel free to tcontacy with out engineer ot sales, visit here